The doorman in Mr. Pitt’s building, cause’s trouble for Jerry who was only trying to be nice. Kramer robs George on the street for some German tourists. George’s father is living with him and when he removes his shirt, George and Kramer see that he has breasts. So, Kramer develops a new undergarment for males (“The Bro” or “The Manssiere”) that will alleviate this problem. Jerry offers his soiled couch to replace the one that was stolen while he was “on duty.” 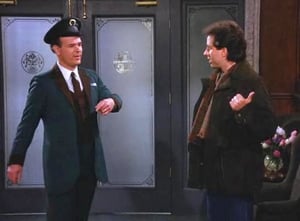